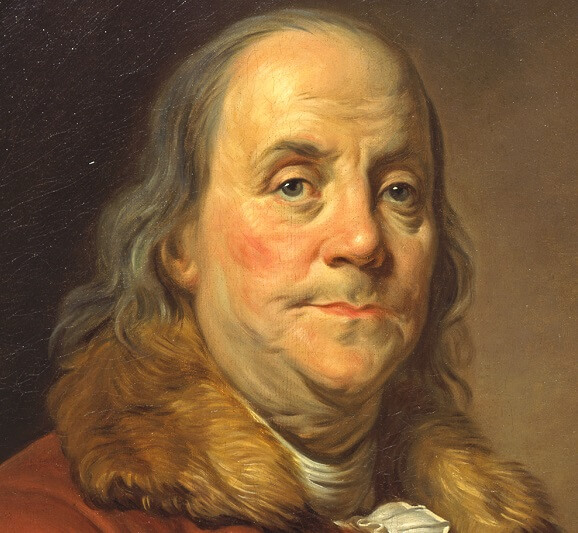 “When about 16 years of age I happened to meet with a book, written by one Tryon, recommending a vegetable diet. I determined to go into it. My brother, being yet unmarried, did not keep house, but boarded himself and his apprentices in another family. My refusing to eat flesh occasioned an inconveniency, and I was frequently chid for my singularity.”

“I made myself acquainted with Tryon’s manner of preparing some of his dishes, such as boiling potatoes or rice, making hasty pudding, and a few others, and then proposed to my brother, that if he would give me, weekly, half the money he paid for my board, I would board myself. He instantly agreed to it, and I presently found that I could save half what he paid me.

This was an additional fund for buying books. But I had another advantage in it. My brother and the rest going from the printing-house to their meals, I remained there alone, and, despatching presently my light repast, which often was no more than a bisket or a slice of bread, a handful of raisins or a tart from the pastry-cook’s, and a glass of water, had the rest of the time till their return for study, in which I made the greater progress, from that greater clearness of head and quicker apprehension which usually attend temperance in eating and drinking…”

Later, Franklin wrote: “I believe I have omitted mentioning that, in my first voyage from Boston, being becalm’d off Block Island, our people set about catching cod, and hauled up a great many.

Hitherto I had stuck to my resolution of not eating animal food, and on this occasion consider’d, with my master Tryon, the taking every fish as a kind of unprovoked murder, since none of them had, or ever could do us any injury that might justify the slaughter. All this seemed very reasonable.

But I had formerly been a great lover of fish, and, when this came hot out of the frying-pan, it smelt admirably well. I balanc’d some time between principle and inclination, till I recollected that, when the fish were opened, I saw smaller fish taken out of their stomachs; then thought I, “If you eat one another, I don’t see why we mayn’t eat you.” So I din’d upon cod very heartily, and continued to eat with other people, returning only now and then occasionally to a vegetable diet.

So convenient a thing it is to be a reasonable creature, since it enables one to find or make a reason for everything one has a mind to do.”

from The Autobiography of Benjamin Franklin (full-text)

Note: Thomas Tryon (1634 – 1703) was an English merchant, author of popular self-help books, and early advocate of vegetarianism, according to Wikipedia.

On the Trail of Heart Attacks in Seven Countries

Chemistry of Cooking and Cleaning by Ellen Richards (1882)