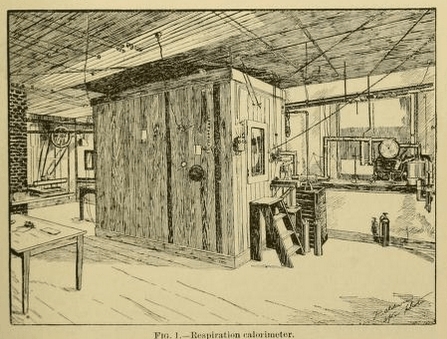 Located in the Orange Judd Hall of Natural Science at Wesleyan University in Middletown, Connecticut.

from the USDA Office of Experiment Stations Bulletin 44 (1897):

The apparatus used in the experiments herewith reported consists essentially of a respiration chamber in which the subject stays during the experiment,appliances for maintaining a current of air through the respiration chamber for ventilation, apparatus for measuring and analyzing this ventilating current of air, and appliances for measuring  the heat given off from the body (see fig. 1).

The apparatus and methods for the measurement of the heat given off from the body, which were devised by Prof. E.B. Rosa, are believed to be quite novel. The experience gained in the use of these appliances has naturally suggested improvements in the details. The description of this part of the apparatus is reserved for publication after the investigations have further progressed.

The room in which the apparatus is situated and in which the larger part of the work of the experiment is carried on is in the basement of the Orange Judd Hall of Natural Science and is a part of the chemical laboratory of Wesleyan University. It is 35 ½ feet long, 20 feet wide, and 9 feet high; well ventilated; supplied with gas, water, and electricity, and heated by steam. During the period of the experiments, which was in late winter, the steam heat was insufficient for comfort during part of the night and gas stoves were used in addition.

As the building is of sandstone, with very heavy walls, the fluctuations of temperature within, especially in the basement, are comparatively slow. Light is supplied by five large windows, and by gas and electricity. A 1 ½ kilowatt motor, connected with convenient shafting, furnishes the power.

Opening out of this room is a smaller one, 5 by 11 ½ feet, fitted with arrangements for cooking the food. It also serves as a dressing room for the subject at the times of entering and leaving the respiration chamber.

The respiration chamber is a room or box in which a man may live comfortably during the period of an experiment. The inside dimensions are: Length, 2.15 meters; width, 1.22 meters; height, 1 .92 meters. It is provided with conveniences for sitting, sleeping, eating, and working, as well as arrangements for ventilation and for the study of the respiratory products. The chamber consists, in fact, of three concentric boxes, the inner one of metal and the two outer ones of wood.

The inner box, of which the inside dimensions have just been given, is double walled, the inner wall being of sheet copper, the outer of sheet zinc. The two walls are 8 centimeters apart. This double-walled box is held in shape by a wooden framework between the two metal =walls. The four vertical corners are rounded, as this simplifies the construction and makes the apparatus rather more convenient for use. The inside volume is approximately 4.8 cubic meters (see figs. 2 and 3).

An opening in the front(2) end of the metal chamber, 70 centimeters high and 49 centimeters wide, serves both the purpose of a window and a door for entrance and exit. Considerable difficulty was experienced in securing an air-tight closure for this door. After numerous unsuccessful experiments with frames of wood and metal and with India rubber gaskets and other appliances, the simpler plan was adopted of using a large pane of glass in a frame as is done in ordinary windows  and securing it with putty. The labor of putting the glass in at the beginning and taking it out at the end of an experiment is very small, and the plan serves the purpose admirably.

Outside of this double-walled metal box are casings of wood. The outer wooden walls are supplied with glass doors turning on hinges and facing the doors in the metal box.  The purpose of the double metal wall of the inner chamber and of the wooden casings is to facilitate the use of the devices for measurements of heat. The chief use of these latter devices is in connection with the experiments to determine the income and outgo of energy, which are not yet complete for publication.

Numerous passages through the walls are needed for tubes, to convey the ventilating current of air and for a current of water to carry off the heat generated by the body of the occupant of the chamber, wires for various electric connections, metal rods for certain connections between the interior and exterior apparatus, and, finally, the “food tube” for passing the food and drink into the apparatus and taking out the solid and liquid excretory products.

The tubes referred to are of various sizes and made of either brass or copper. The “ventilating tubes” have an internal diameter of 4 centimeters. The food aperture is of copper and has an internal diameter of 15 centimeters. It is situated on the left side of the apparatus, and is provided with a cap at each end. The outer cap is attached by a screw so that it may be made airtight.

In putting in the food and other materials the cap is taken off, the receptacle containing the food is placed in the tube and the cap put on again. A signal is then given to the man inside who removes the inner cap and takes out the receptacle. The materials from within are passed out in corresponding manner. In this way there is no danger of ingress or egress of any considerable quantity of air.

A telephone furnishes a means of communication between the inside and outside of the chamber; the wires of the telephone pass through rubber stoppers inserted in a tube, which, in its turn, passes through all of the boxes and walls and is soldered to the inner copper wall. Other wires through the same tube provide for electrical connection with a small bell on the outside so that the person within may call an attendant whenever desired.

Adequate provision is made for the ventilation of the chamber and for maintaining a uniform humidity and temperature by means of the appliances described below. An inconvenient rise of temperature is prevented by a current of cold water which passes through a system of pipes inside of the chamber. This device forms a part of the arrangements for measuring the heat given off from the body.

As the results of such measurements are not reported in this article, it will =suffice to say that the plan followed is in fact the opposite of that used in heating houses by hot water radiators, i. e., instead of passing hot water through radiators to give off heat for warming the air, cold water is passed through absorbers to remove heat from the air.

A wet and dry bulb hygrometer, capable of being read to tenths of a degree centigrade, is hung in the rear of the chamber and observations were made by the occupant, generally at intervals of two hours, during the period of the experiment. These observations were reported by the telephone and show the hygrometric condition of the air inside of the apparatus.

The furniture used in the experiments consisted of a light folding canvas cot bed, a folding chair, and a folding table. Such clothing and bedding as were needed for comfort were taken in by the man at the beginning of the experiment, and small articles were passed in and out through the food tube at convenient times. The floor was protected by carpeting. The amounts of water held by the furniture and clothing, etc., were determined as accurately as practicable by weighings at the beginning and end of each experiment.

(1) In these descriptions the end in which the window is situated is called the front. The terms right and left are applied to the sides at the right and left of a person standing outside at the front end and facing the window.

History of the Calorie in Nutrition by James L. Hargrove

Space meals aboard the Apollo 10 space flight in 1969