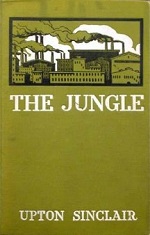 The passage in The Jungle by Upton Sinclair that sickened America:  “Worst of any, however, were the fertilizer men, and those who served in the cooking rooms. These people could not be shown to the visitor,—for the odor of a fertilizer man would scare any ordinary visitor at a hundred yards, and as for the other men, who worked in tank rooms full of steam, and in some of which there were open vats near the level of the floor, their peculiar trouble was that they fell into the vats; and when they were fished out, there was never enough of them left to be worth exhibiting,—sometimes they would be overlooked for days, till all but the bones of them had gone out to the world as Durham’s Pure Leaf Lard!” (end of Chapter 9)

The Jungle was a 1906 novel by the American writer Upton Sinclair, who wrote it to portray the appalling conditions that immigrants to the United States lived under. Americans, however, reacted to his  exposure of nauseating practices in the American meatpacking industry,  based on an investigation he did for a socialist newspaper. Sinclair’s book led to a quick reform of the industry and improved food inspection.

Catching Fire: How Cooking Made Us Human by Richard Wrangham

Contributions of Women to Human Nutrition