U.S. Military Rations from the Revolutionary War to the Civil War 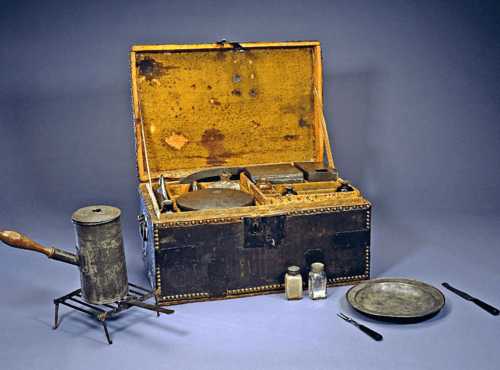 For more than a century after 1776, the basis of all troop feeding–for soldiers in camp, on the march, in action, or just surviving–was the simple fare of meat and bread, and sometimes vegetables, known as the garrison ration. From the Revolutionary War to World War I, the garrison ration served the unit, the small group, and the individual. Moreover, it was intended to serve them in organized messes, in isolated groups, and in individual situations of combat and survival.

In the Revolutionary War, this all-purpose ration established by resolution of Congress, included beef, pork, or salt fish; bread or flour; peas or beans (or “vegetable equivalent”); milk; rice or Indian meal; and spruce beer or cider. Candles and soap also were authorized “essentials.” Ordinarily, preparation of the food was up to the soldier. To provide fresh meat, cattle and hogs were driven to camp at “proper seasons” for slaughter and curing. Depending on the availability of supplies, other occasional variations were provided from time to time. One of the most welcome was “spirits.”

Immediately after the Revolutionary War, the issue of meat was reduced and fresh foods virtually disappeared from the ration. The changes were not without their effect on the health of the soldier nor was this result to go unnoticed. Dr. Benjamin Rush, Army Surgeon in 1777-78, and others, complained of the lack of fresh vegetables and pointed out that more soldiers died from sickness than were killed by the sword. There was, however, little that could be done to increase the supply of fresh foods-food preservation and transportation facilities were primitive and undeveloped and decades were to pass before these factors helped improve military subsistence.

Some attempt was made after the Revolution to increase the fare of the soldier serving on the frontier. In recognition of the severity of frontier life, Congress, in 1796, authorized the issue of additional amounts of flour or bread, beef, pork, and salt as supplementary items to the regular garrison ration. Coffee appeared in the ration in October 1832, when President Andrew Jackson substituted coffee and sugar for rum and brandy.

This Presidential substitution was recognized by Congress in the Act of July 5, 1838, which declared “that the allowance of sugar and coffee to the noncommissioned officers, musicians, and privates, in lieu [of whiskey], shall be fixed at six pounds of coffee and twelve pounds of sugar to every one hundred rations, to be issued weekly when it can be done with convenience of the public service, and, when not so issued, to be provided for in money.”

From Chapter 1 of “Special Rations for the Armed Forces, 1946-53,” By Franz A. Koehler, QMC Historical Studies, Series II, No. 6, Historical Branch, Office of the Quartermaster General, Washington D.C.  1958.

Early days of nutrition research in the U.S. by Leonard A. Maynard (1962)