Nutrition Investigations among Fruitarians and Chinese (1901) 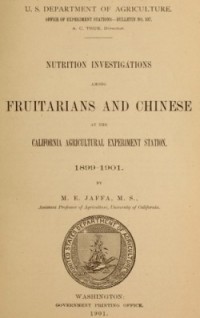 “We often hear those who recommend a vegetarian diet say, “See how much hard work the Chinamen can do, and they live almost entirely upon rice,” and many believe that the Chinese to a great extent are vegetarians. We have, all of us, probably, idly wondered if this were true, but have not had sufficient knowledge to justify us in assenting to or contradicting the assertion.

It is generally true that diet is modified by environment, and it seems probable that although they are conservative in such matters, the Chinese in the United States have, to some extent at least, adopted American food habits. But that the bulk of their food is Chinese is shown by a visit to the Chinese markets in any American city where there is a considerable colony of them.

Whatever the diet of the Chinese in America, the presumption is that it must be suited to their needs and must supply the energy necessary for a large amount of physical work. No Californian can doubt that the Chinaman is capable of great physical exertion, for it has been clearly demonstrated.

While it is generally conceded that a strong white man accustomed to the same kind of work can do 20 per cent more work than a Chinaman where the conditions are favorable, it has been found that under adverse circumstances, such as long hours, great heat, or exposure to cold and dampness, a Chinaman can not only do more work, but can stand the strain better. In California it appears that he can be depended upon to work through the season, while the white man is often obliged to rest at the most important time.

As regards their work in the cities, we are all familiar with the sight of the Chinese fruit and vegetable peddler with his baskets suspended by ropes to the pole that he carries across one shoulder. Few Americans could walk as he does for hours at a stretch, often up and down hill, burdened with a load of from 300 to 400 pounds in the baskets. It must not be supposed that the ability to perform the task is due entirely to physical strength; much is owing to training, probably also to inheritance, since for ages the muscles employed have been developed by this kind of work. But at all events there is a great amount of energy required, and it must necessarily, like all energy for the work done by the body, come from the food eaten. And what is that food? Is it, as so many affirm, almost entirely rice? It was to answer such questions that the present investigation was undertaken.

In choosing subjects for the dietary studies reported herewith it was thought best to select men engaged in different kinds of work, so that comparisons with the commonly accepted dietary standards for Caucasians performing different amounts of work could be made. The studies were made with (1) the family of a Chinese dentist, (2) employees in a Chinese laundry, and (3) the laborers on a truck farm, styled in California a vegetable garden. The first represents a professional man, with little muscular work; the second, men at moderate indoor work; and the third, men at severe outdoor work.”