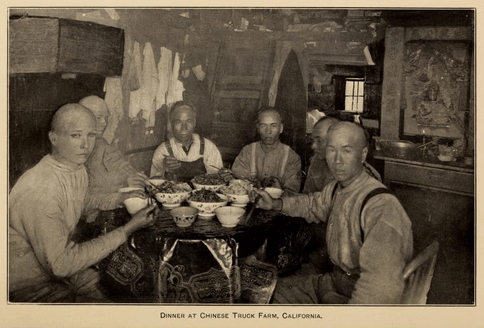 “The truck farm, called locally a “vegetable garden.” where the dietary study was made, is situated in Berkeley, California, and is similar to hundreds of others in the State conducted entirely by Chinese. In some cases only one crop is grown, but generally all kinds of vegetables are raised, and sometimes small fruits in addition. The size of these farms, which are usually leased, varies from a small patch to hundreds of acres, and the fields, almost without exception, are maintained in a very high state of cultivation.

The farm in question contains 45 acres, for which a yearly rental of $685 was paid. It was very intelligently managed. The number of employees depends upon the season, varying from 12 to 18. The men commenced work about 6 a. m. and continued, with an interval of one hour for dinner, until 7 p. m. The men studied performed severe outdoor work.

No distinction was made in wages, each man receiving $1.10 per day. The proprietor of the truck farm boarded the laborers at the rate of $1.10 per week, which was less than the actual cost of the food eaten. When asked the reason, he stated that if he charged more for food the men would demand higher wages.

The house, or more properly shanty, where the men live is typical of those found on similar farms throughout the State. The barn and dwelling house are under the same roof, being separated only by a board partition. Some of the products of the garden were sold to the residents of Berkeley and the remainder shipped to the San Francisco market.

Three Squares: The Invention of the American Meal by Abigail Carroll

History of Food in 100 Recipes by William Sitwell